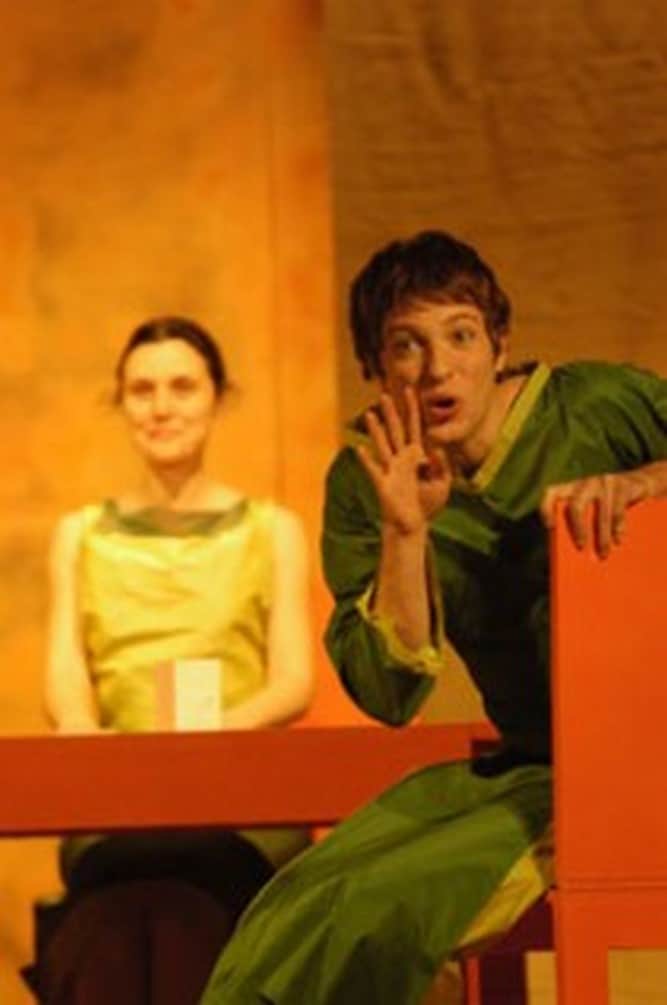 By looking to the masters of sound and speech such as Beckett and Pinter, the staging of La Festa della Regina took shape: a show whose strengths lie in ironic language and rhythmic research. The scenography consists of sloping burlap descending from the backdrop to the floor, from which certain rough “packages” à la Man Ray or Christo emerge, and a large vertical orange door, a concrete yet symbolic boundary between outside and inside.

The story is inspired by a news clipping that appeared in the national press a few years ago. In an unspecified country where many women mysteriously disappear and where no one has been getting married for years live three sisters who plan to open a wedding dress shop. They think marriages will start again with the opening of their enterprise. A letter carrier (whom they never manage to see) delivers under their door the umpteenth postcard from their brother in Australia. They are always different, never the same. One day, they receive a notice from the bank: they have the money they need to open the shop. However, one of the three decides she is no longer interested in the project and wants to leave. She disappears. No one knows where she goes. Then, a new postcard arrives that, strangely, is the same as another that has already been received. And so it goes until the end of this story of disappearances and reappearances, which at times may seem like a provincial detective story, and at others is too surreal not to be a metaphor for a country that is out of breath, losing compassion, hope, and conscience. Three actors embody this vision, relating to each other in a language that is a mix of their dialects.