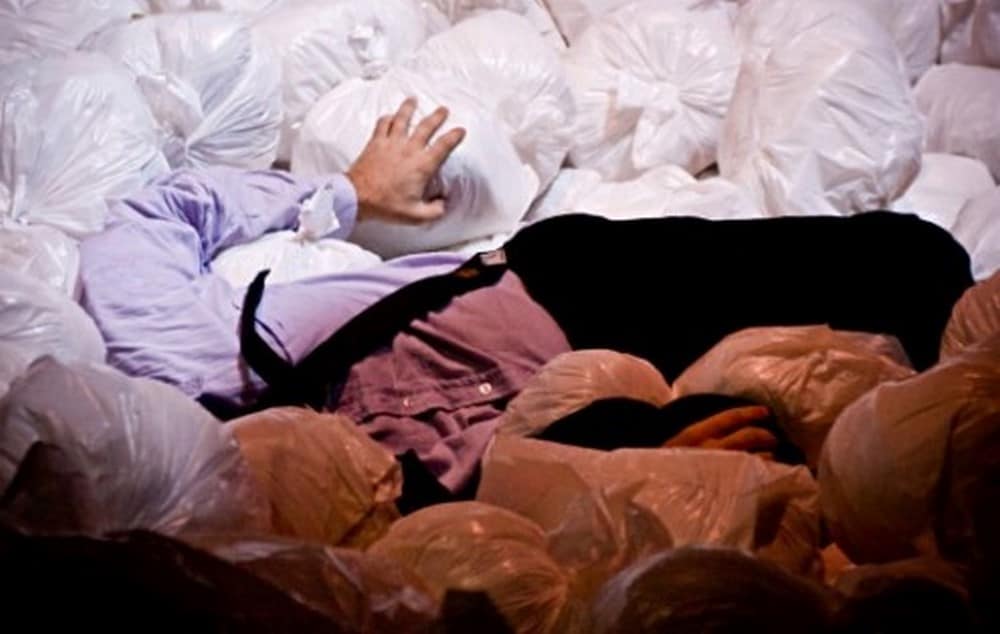 I am singl’d out and separated, as it were, from all the world…I am divided from mankind, a solitaire, one banished from human society. (Daniel Defoe,Robinson Crusoe)
Many cities have a reverse, a hidden face. (Italo Calvino, Invisible Cities)

A man alone, on a desert island: fascination and violence in his condition. Crossing the threshold of everyday life, where the intensity of the body moves freely, in the secret man’s inwardness, out of the glaring progression of History.
The island is somewhere else. It is below our world, it represents the reversal of our world. All that we get rid off ends in this island.
The wreck is a nightmare, but the island is also the place for a new beginning: a clean sweep of the old life in order to make everything relive. But does civilization stand the test of Nature? Or has the island a hidden, dark, magic face, bristling with dangers?

The island is smothered by three layers of plastic: it is the representation of an unspoken brutality that we have to face whenever we begin all over again.
One hundred kilos of sponge rubber and more than one thousand plastic bags are the habitat where two men try to survive. A place full of signs of our everyday life and, at the same time, dreadfully empty, cold, hard and hostile.